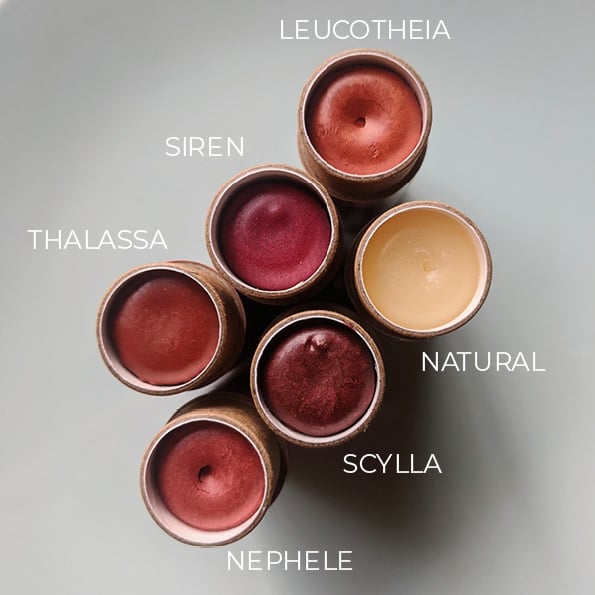 Please note : tinted lipbalms are not so heavily pigmented as lipsticks, but more of a 'lip tint', for everyday / subtle glam. As you warm the wax against your skin you'll notice the colour is somewhat buildable and shows up more intensely with heavier application. Colours in photo are faithful to real life product.

TIP: The natural balm also works great as a barrier balm for all minor cuts, burns & abrasions - beeswax has natural antibacterial, antimicrobial and soothing qualities, while macadamia oil is a superhero when it comes to nourishing skin and helping it heal and regenerate.

Once empty, the whole tube can be thrown in the home compost / green waste bin or buried in soil where it will naturally break down. Yes, even the inks and adhesives in my labels are non-toxic and 100% safe for the compost.

**a note about mica: Natural mica has many issues attached to it, namely that it is mined from the earth so therefore environmentally destructive, as well as unsafe for the miners (and in India where most natural mica comes from, the use of child labour in mica mining is a massive humanitarian issue) and due to its microscopically sharp edges, is a skin, eye and respiratory irritant.

We only use synthetic mica, which is a crystal pigment engineered in the lab to have microscopically smooth edges - so not only is it perfectly safe for cosmetic use, i.e. non-irritating for lips/skin, eyes and lungs, it is also environmentally innocuous, presenting no threat to other species when washed down the drain. It effectively behaves in the environment like a very fine sand, albeit with that beautiful shimmery quality. Synthetic mica is used in edible glitter for cakes for these reasons, and there are no toxic by-products produced in its manufacturing.

'I love love love the tinted lip balms. I have such sensitive skin, and generally react to chemist lip balms and any lipstick. I can wear all of these. They are so soothing, and have just the right amount of lip tint. So happy I found your products.' - Lizzi

'My new favourite lip balm! I love how simple it is and I especially appreciate the eco friendly packaging. I will definitely be trying out your other products.' - Keisha

'I suffer from severely dry lips and have tried more lip balms than I can count! I prefer to use all-natural/Eco-friendly ingredients so was excited to come across Big Blue Cosmetica at the St Kilda markets last year! I have finally hit the jackpot with the lip balm AND it comes in a compostable tube! Will definitely purchase more products from this brand in the future' - Coral

'Love the lip balms they are hydrating and have a lot of product. The tinted lip balm has just the right amount of colour to make it look natural. All eco friendly. would buy from here again' - Maya

'I love it so much [the tinted lipbalm]. It applies so well, and is so smooth. The colour is incredible. I will be purchasing again.' - Aimee, who bought the SIREN tint

'Love these so much! Best lip balm i’ve ever had' - Arabella

and for those interested in the stories behind the names....

T H A L A S S A
A classic earthy brown tinted red named after the primordial goddess
of the sea, (also the modern Greek word for the sea) - Thalassa. Together with her male counterpart, Pontus, she produced the fish and all other sea creatures. She was the literal body of the sea and in the fables of Aesop manifests as a woman formed of water rising from her native element. In Greco-Roman mosaics Thalassa is depicted as a woman half-submerged in the sea, with crab-claw horns, seaweed for clothing, and a ship’s oar in her hand.

S C Y L L A
A deep, blood plum, shimmery tint - for expressing your darker side.
Scylla was the fearsome sea monster who haunted the rocks of a narrow strait opposite the whirlpool of Charybdis waiting to devour sailors from ships who passed too close. According to late classical writers she was once a beautiful nymph loved by the sea-god Glaucus but was transformed into a monster by her jealous rival, the sorceress Circe. She was said to have six long necks with heads lined with a triple row of sharp teeth and a voice like the crying of dogs.

L E U C O T H E I A
A light golden / tangerine shimmer named after Leucotheia, the ancient Greek sea goddess who came to the aid of sailors in distress. Once a mortal princess named Ino, she and her husband Athamas were punished by Hera for fostering the infant god Dionysus. Hera drove Athamas to a murderous rage, which lead him to kill their eldest child. To save herself and their other child, Melikertes, Ino took flight and leaped off a cliff into the sea. The pair were thereby welcomed into the company of the sea gods and renamed Leucothea (literally translated as the White Goddess) and Palaemon.

S I R E N
A sweetly seductive, cool-toned pink made with blackberry powder and mica, named after the ancient Greek sirens - three dangerous creatures who would lure sailors to their death with their bewitching song. Formerly companions of Persephone, who was abducted by Haides, they were given the bodies of birds by Persephone’s mother Demeter to aid in the search. Eventually they gave up and settled on the island Anthemusa where their singing would tempt sailors to shipwreck on the rocky cliffs, or leap from their boats to drown in blissful longing for the source of their sweet music.

N E P H E L E
A bright playful coral pink, perfect for summer days spent lying in the sun looking up at the clouds, inspired by the fantastical stories of the beautiful nymph Nephele. In classical mythology it is said she was formed of clouds into the image of Hera, the wife of Zeus. It was from her that the famous golden fleece came - she sent a flying golden ram to save her children from danger; daughter Helle, who fell into the ocean now named after her, the Hellespont, and her brother Phrixus, who then gifted the fleece to the king on whose shores he found safety. For embracing your sense of adventure, wonder and creativity.

0
Your bag is empty
Start shopping